The Monomyth (The Hero's Journey): The Heroine's Journey

An introduction to the framework of the traditional hero's adventure

The heroine's journey more closely examines the inner journey of discovery; specifically from a feminist lens. Originally created by Maureen Murdock, a therapist working with women, its use as a writing tool is debated.

While written with a specific gender in mind, many of the stages share common goals with the hero's journey and are reflections of an inward journey.

Diagram of the Heroine's Journey 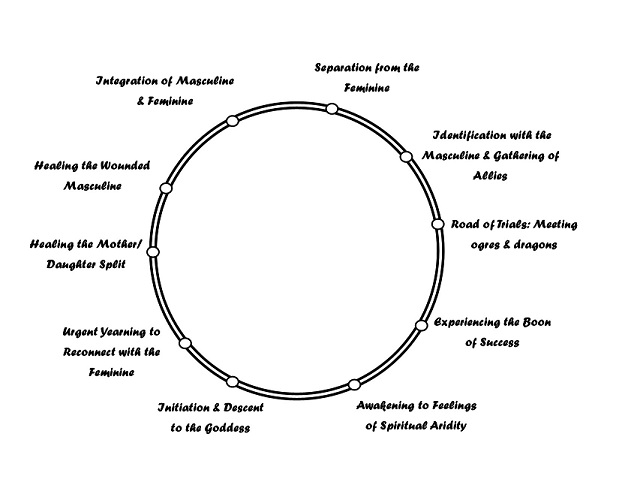 The steps of the Heroine's Journey

Separation from the Feminine

The Heroine seeks to separate from the mother or other older woman, who represents the old order and the status quo. Often she feels guilt at surpassing this figure.

Identification with the Masculine: the gathering of allies

The search for a woman's role through acceptance by male norms-- leadership, success, and power in the workplace. She often chooses her own path instead of the one set before her.

The Road of Trials: meeting ogres and dragons

Many of the trials that the heroine must face are of her own making-- self-doubt, fear, etc. She must overcome both outward adversity from the men and other people in her life, but ultimately must overcome herself.

Experiencing the Boon of Success

After achieving the power, recognition, and/or success that she sought, the Heroine will drive herself to a state of unrest. She has no true satisfaction in anything that she does, but yet cannot say no to using up more of her time. She must find the courage to be herself; limited.

Weary, the heroine looks for meaning, and yet, she fears becoming invisible, like the women before her. Her success was temporary or has been unsatisfactory. The way of success she has been traveling is no longer enough.

Initiation and the Descent to the Goddess

Usually this occurs as a role ends, often a life changing loss. The heroine is confused, sad, alone, angry, and often raw. But by looking inward she can reclaim and rebuild herself. She is facing a crisis and fallen into despair.

Urgent Yearning to Reconnect with the Feminine

Accepting the loss of the relationship with the older female, she often begins to focus on community. The heroine cannot go back, but if she faces her fear she can continue to move forward.

The heroine finds a new strategy and reclaims her own value. With a new perspective she is able to continue forward.

By accepting the self and letting go of the power, money, and success she sought she can make peace with herself. The heroine must accept both sides of her nature.

Integration of the Masculine and Feminine

By accepting both sides of her nature she has gained a new understanding of herself.