An introduction to the framework of the traditional hero's adventure

The Hero's Journey is a myth based framework. Incredibly flexible, it has three main parts-- the separation, where the hero sets out on his journey, seeking (possibly reluctantly) adventure. Secondly, the initiation, where the majority of the journey happens-- the hero arrives. Finally is the return. The hero has finished whatever they set out to do and has obtained the object (treasure, love, or knowledge). Now he must return home. These are the basic elements of every Hero's journey, and can be used in a variety of ways to improve, analyze, and create narratives.

Diagram of the Hero's Journey 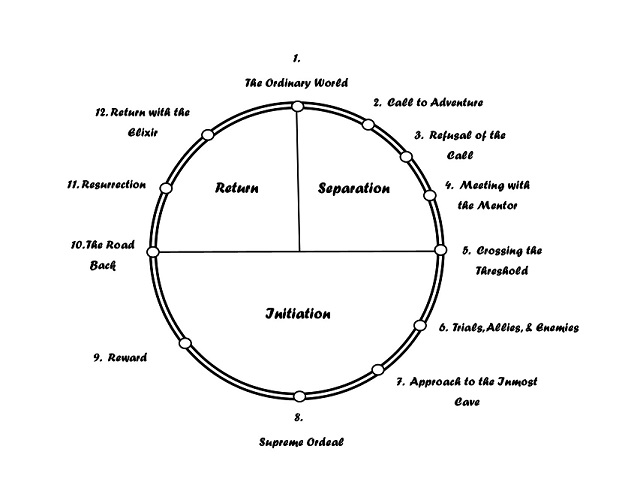 The Steps of the Hero's Journey

This is the original world of the hero, which "suffers from a symbolic deficiency." The hero is lacking something, or something is taken from him.

The Call to Adventure

The hero is given a challenge, problem, or adventure. Often it appears as a blunder, or chance. This stage establishes the goal of the hero.

The Refusal of the Call

The (often) reluctant hero has to be set along the correct path. He must weigh the consequences and be excited by a stronger motivation to proceed further.

Meeting with the Mentor

The hero encounters a wise figure who prepares him for the journey. This figure (or item) gives advice, guidance, or an item, but cannot go with the hero.

The hero has committed to his task, and enters the special world. Often he is met by a threshold guardian.

In the special world, the hero learns the new rules by meeting people and obtaining new information. There is often a "local watering hole" component. This is where the true characteristics of the hero are revealed.

Approach to the Innermost Cave

Now our hero, and often his allies, have come to the edge of the dangerous place where the "object of the quest" is hidden. This stage often is the land of the dead.

The hero faces danger, often a life-or-death moment that is either physical or psychological.

Reward, or Seizing the Sword

After surviving, our hero takes possession of the object, typically a treasure, weapon, knowledge, token, or reconciliation.

The hero must now deal with the consequences of their actions. They may be pursued by remaining forces. They now face the decision to return to the ordinary world.

One final test is required for the purification and rebirth of the hero. Alternatively, it may be a miraculous transformation.

Return with the Elixir

The triumphant hero returns to the ordinary world bearing the elixir. Common elixirs are treasure, love, freedom, wisdom, or knowledge. A defeated hero is doomed to repeat the lesson.

Examples of the Hero's Journey

The residents of Emond's Field lead ordinary lives. Rand al' Thor, Mat, Perrin, and Egwene are youths coming of age in a quiet agrarian town. Rand and Egwene have romantic interest in one another, while Rand, Mat, and Perrin are boyhood friends.

--The Eye of the World, Robert Jordan

The Call to Adventure

Harry receives letter after letter to attend Hogwarts. When they are ignored, he receives hundreds of acceptance letters. These letters are delivered with persistence, in various magical, and unthinkable, ways.

The Refusal of the Call

Originally warned by some passing hunters that she, the Unicorn, may be the last of her kind, the unicorn does not believe that she is. As time passes, and no others come near, the Unicorn's doubt and worry becomes so great that she leaves her forest to seek out any hint of her own kind.

Meeting with the Mentor

Through a seemingly chance encounter, Arthur, or Wart, as he is called, stumbles upon the cottage of Merlyn. Merlyn is a wizard who then goes back home with Wart and becomes his tutor, teaching him the way to become a great man through a series of  magical transformations that teach him about the animal kingdom.

After setting out secretly, Eleanor stops in Hillsdale for lunch and is faced by the resentful people in the gas station. The road that leads to Hill House is rutted and in poor condition, and the trees themselves seem to try to keep her from proceeding. The gate is "clearly locked-- locked and double locked and chained and barred," and to gain entrance she must face the house's guardian, Mr. Dudley, who is altogether unwelcoming and tries to convince her to leave. Even as she drives her car up the driveway, she  feels an overwhelming sense that the house itself is vile. Every move toward the house is a deliberate choice that Eleanor must make with all of her strength. This deep internal unwillingness to enter Hill House is another threshold guardian.

The party of dwarves (and hobbit, Bilbo), are trapped by trolls, but are saved by Gandalf. They travel to Rivendell and receive aid from Elrond. As they pass through the Misty Mountains, goblins catch them. While the party is saved by Gandalf, Bilbo is separated from them in the tunnels. He is found by Gollum, who offers to lead him out, in exchange for the answers to a series of riddles. He manages to escape on his own through the power of the invisibility ring that he found. This ring aids him throughout the rest of his trials in Mirkwood forest, where he is able to save the party of dwarves from giant spiders, and from the Wood-elves' dungeon.

Approach to the Innermost Cave

Carrie and Tommy have arrived at the Prom, despite all odds. His friends welcome her, even though they are not her friends. Despite the dread she felt entering the prom, and the worries of Sue, everything seems to be going well. Then the Prom King and Queen are announced, and both Carrie and Tommy are surprised to be selected, heading towards the stage.

During the final battle, Garion faces the God of Angarak, Torak. This battle was foretold for hundreds of years, and the god  tries to tempt him, but is refused. Garion vanquishes him with the sword of the Rivan King, bringing peace to all the lands.

After the Narnian army defeated the White Witch's forces and Aslan kills her, there is peace once more in Narnia. As a reward for their role in the battle, the Pevensie children are crowned high kings and high queens at the castle in Cair Paravel.

--The Lion, the Witch, and the Wardrobe, C.S. Lewis

After defeating Arawn's forces and the defeat of Annuvin, Taran and his allies travel home to Caer Dallben. Here, the champions discover their journey is not quite finished; the Sons of Don and all those with magic, will now have to depart Prydain for the Summer Country.

Ged faces the shadow that has pursued him since its release during his magical duel. By giving the shadow his own name, he is able to face it finally, merging with it. He is reborn, finally healed and whole from his previous injuries.

After hearing the complete tale from the vampire Louis, the reporter is still desperate to be turned immortal. Angering the vampire, by clearly not receiving his message, the vampire attacks the young reporter before disappearing into the night.

-- Interview with the Vampire, Anne Rice

Best known for his work, The Hero with a Thousand Faces, Joseph Campbell was a prolific author and editor who worked on many myth related books. He was a public speaker and taught at Sarah Lawrence College. Nurturing a life long passion for mythology, Campbell studied comparative mythology and religion. His most well known phrase is "Follow your bliss."